Micki Peluso began writing after a personal tragedy, as a cartharsis for her grief. This lead to a first time out publication in Victimology: An International Magazine and a 25 year career in Journalism. She's freelanced and been staff writer for one major newspaper and written for two more, and has published short fiction and non-fiction, as well as slice of life stories in colleges and magazines, including e-zine editions.Two of her horror stories were recently published in "The Speed of Dark", an anthology by author and publisher, Clayton Bye. Micki is a professional book reviewer for The New York Journal of Books and Readertoreader, as well as a freelance reviewer. Her first book was published in 2008; a funny true family story of love, loss and survival, called, . . . AND THE WHIPPOORWILL SANG. The book has been reissued as a second edition in March of 2012 and won the silver award from NESTA CBC, for writing that helps make the world a better place. Currently Micki is working on a collection of short fiction, slice of life stories and essays, in a book called, "Heartbeat. . . Slices of life."

And the Whippoorwill Sang 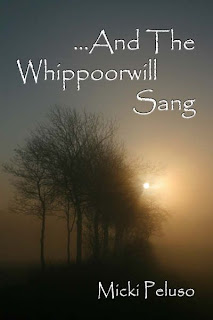 Happy times, a sunny day, a driving drunk, eight lives forever changed. A mother’s account of actual events of her family, filled with laughter, love, loss, and survival. It is a day like any other, except the intense heat wave has broken and signs of early fall are in the air. Around the dining room table of her 100 year old farmhouse Micki Peluso's six children along with three of their friends eagerly gulp down a chicken dinner. As soon as the last morsel is ravished, the lot of them is off in different directions. Except for the one whose turn it is to do the dishes. After offering her mother a buck if she’ll do them, with an impish grin, the child rushes out the front door, too excited for a hug, calling out, "Bye Mom," as the door slams shut. For the Peluso’s the nightmare begins. Micki and Butch face the horror every parent fears—awaiting the fate of one of their children. While sitting vigil in the ICU waiting room, Micki traverses the past, as a way of dealing with an inconceivable future. From the bizarre teenage elopement with her high school sweetheart, Butch, in a double wedding with her own mother, to comical family trips across country in an antiquated camper with six kids and a dog, they leave a path of chaos, antics and destruction in their wake. Micki relives the happy times of raising six children while living in a haunted house, as the young parents grow up with their kids. She bravely attempts to be the man of the house while her husband, Butch is working out of town. Hearing strange noises, which all the younger kids are sure is the ghosts, Micki tiptoes down to the cellar, shotgun in hand and nearly shoots an Idaho potato that has fallen from the pantry and thumped down the stairs. Of course her children feel obligated to tell the world. Just when their lives are nearly perfect, tragedy strikes—and the laughter dies. A terrible accident takes place in the placid valley nestled within the Susquehanna Mountains in the town of Williamsport, Pennsylvania. On a country lane just blocks from the family’s hundred year old haunted farmhouse, lives are changed forever. In a state of shock, Micki muses through their delightful past to avoid confronting an uncertain future—as the family copes with fear and apprehension. One of her six children is fighting for life in Intensive Care. Both parents are pressured by doctors to disconnect Noelle, their fourteen-year-old daughter. Her beautiful girl, funny and bright, who breathes life into every moment, who does cartwheels in piles of Autumn leaves, who loves to sing and dance down country roads, and above all loves her family with all her soul. How can Micki let this child go? The family embarks upon yet another journey, to the other side of sorrow and grasps the poignant gift of life as they begin. . .to weep. . .to laugh. . .to grieve. . .to dance—and forgive.

Butch bought a bright red canoe that summer. Since working out of State, we did more family things than when he’d worked in town. He tied the canoe to the top of the station wagon. I packed an ice chest of picnic food and blankets and off we headed to the Susquehanna River. The boys explored the woods while I dangled my feet off the small pier on the river bank. The girls, afraid of fish nibbling at their toes, passed on that. Butch managed to convince me to take a ride with him across the width of the river. I couldn’t swim and we had no life jackets. I climbed into the tippy canoe as he paddled across—the canoe rocking from side to side. The river whispered a serenity which belied its treacherous steep drops and swirling eddies. One trip was enough for me. Some experiences don’t warrant repeating.

Butch and the boys paddled all the way to the rapids near the bridge. I paced the riverbank watching for their safe return.

He then took the three younger girls out, but stayed close to the shoreline. Butch was calling out to those paddling, “stroke, stroke,” when Noelle decided she wanted to stand up.

I stood on the pier, horrified, watching as the canoe capsized and they all went under. All I could see was splashing around the overturned canoe—and then a small figure literally “walking on water” as fast as her legs could carry her to shore. I only knew of one other being that walked on water, but that day, I swear that Nicole was upright all the way till she reached land.

Kelly and Noelle insisted they could climb back into the canoe that Butch had righted.

“You’ll never be able to climb back into a canoe from deep water,” he told them.

Noelle felt a fish brush her backside. Then Kelly felt something touch her legs.They both screamed and launched themselves back into the canoe. The biggest calamity of the day, besides aging me ten years, was the loss of Noelle’s cool new sunglasses.

“Wanna take another ride with me?” Butch asked.

Martha Love rated it 5 of 5 stars

This book is truly hard to put down! Micki Peluso's memoir "And The Whippoorwill Sang" is a true tale about two people very much in love, often struggling but at heart loving every minute of it to raise a large family. Sometimes there is desperation and grief when children fall ill or tragedy hits the family, and there is frustration when the day-to-day struggles of parenthood exhaust both parents, but largely, the book is filled with absolutely hilarious tales of their family life. Be prepared to laugh out loud and tear up at other times!

The story unfolds in flashback format, beginning in 1981 in the hospital when their beautiful 14 year old daughter, Noelle, is fighting for her life after being hit as a pedestrian by a drunken driver. The story of Noelle's final days in the hospital and Micki's struggle to be the loving mother that she is until the very end of her child's life, briefly interweaves throughout the book in intermittent short chapters. The flashback and family story begins with the eloping of Micki and her handsome husband Butch in 1959 and moves slowly, tale by tale, up to and past the time of Noelle's death.I read this book during the week of a major surgery of a close relative in my own family and it helped me so much. When I first started the book, I thought that perhaps I should have waited to another time to read it and that it was going to be stressful, because it is ultimately about the tragedy of her daughter Noelle. But, as I read Micki's memories of motherhood and the many beautiful, sometimes worrisome but mostly totally humorous experiences of raising her beautiful and large family, I was able to also reflect upon my own parenthood days and the lives of my own children. Micki writes with such genuine feeling and humor about her own experiences that she allows the reader to have the space to relax and relate their own life when they felt the same way. It was for me de-stressing, meditative, and enjoyable to read.

This book is not just about family and parenthood, not even just about grief of a mother and the tragedy of a beautiful child being killed by a drunken driver and the need for tougher laws to deter such recklessness, but more profoundly it is about the eternity of the soul. Micki reveals many experiences throughout the book that she and the rest of the family have with spirits of people who have passed on and she shares this same communication and understanding of eternity about her own daughter who has passed on. It is in that way, a book with the universal theme of hope and this feeling of hope is left in the hearts of the readers. I highly recommend this extremely well written, 5 star book.

Micki Can Be Found on the Following Internet Sites

I'd like to THANK Micki for taking the time in working with me in making this post possible. If you have any questions concerning her book, her writing, etc.; I'm sure she'll be very happy to answer them.

The instructions are simple: Write a poem or short vignette using the picture featured in this post as your inspiration. [can't seem to be able to copy the mirror over to here]

After thinking about it for a while, I decided to write a series of four HAIKU

To look at me from behind

As others usually do

Please, is my hair combed

Because I’ve got no iron

For them to be gone.

I now can venture outside