Kyra Halland is a wife, mother, and full-time homemaker living in southern Arizona. She's been married to her college sweetheart for 29 years, and they have two sons ages 24 and 17. They also have two cats, who are really the ones in charge of our house. Kyra always loved reading and also telling stories to herself, but it was a long time before she thought of actually being a writer. She went into music through high school and college, and eventually earned a Master's degree in Music History. As soon as Kyra finished her degree, she found herself transitioning to life as a stay-at-home mom of her first baby, and decided it was time for a new intellectual challenge. 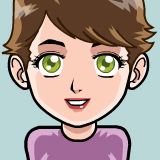 Kyra has always loved reading fantasy, and thought it wasn't fair that in the books she read, wizards never got to fall in love, or, if they did, they never got to do anything about it. So she decided to start writing fantasy novels with a strong romantic element. Kyra wrote off and on for about twenty years, then participating in National Novel Writing Month gave her the creative burst to really dive in more seriously. Not long after that, she started learning about the new opportunities available for independent authors to publish directly via Amazon, Smashwords, CreateSpace, etc, and decided the right time had come for me to turn pro. She released her first novel, Urdaisunia, in February, and has many more novels to come!

For two thousand years, Urdaisunia, the Land of the Two Rivers, was the greatest civilization in the world. But now it lies in ruins - conquered by the barbarian Sazars, wracked by famine and drought, threatened by foreign invaders, abandoned by the gods who once favored Urdaisunia above all other lands.

Rashali, a young Urdai widow, struggles to eke out a living in her plague-decimated village while mourning her husband and daughter. With the local rebel group, she dreams of overthrowing the hated Sazars and restoring Urdaisunia to freedom and its former glory, but victory for the starving, destitute Urdai people seems impossible.

The Sazar High Prince Eruzasharbat believes that the Sazars' oppression of the Urdai will one day lead to an uprising that would be disastrous for Sazars and Urdai alike. However, to his father the king and his two brothers, who are both eager to take Eruz's place as heir, his fears are an unacceptable weakness, bordering on treason. Eruz walks a dangerous line between loyalty to the Sazars and doing what he believes is best for all the people of Urdaisunia. 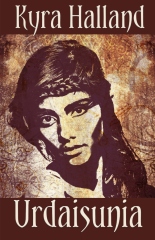 Then a chance encounter between prince and rebel and a wager between two of the gods set Eruz and Rashali on intertwining paths of danger, intrigue, love, and war - paths which will change their destinies, the destiny of their beloved land of Urdaisunia, and even the fate of the gods, forever.

As Rashali started back across the dusty trade road that lay between the river and Moon Bend, she bit back the anguish that still, after all these months, threatened to overcome her at the thought of her husband and daughter. They were gone, Araskagan had sung them into the House of the Dead. Her grief would not bring them back. Even if she knew the Name of the Mother of the Gods, she couldn’t bring them back. All she could do was go on living, and somehow, someday, see them avenged.

Without warning, there was a rush of pounding hooves from her right, and a voice shouted, “You, Urdaina! Watch out!” A wall of black struck hard against her right side. She tumbled to the ground, the yoke sliding from her shoulders, the buckets spilling their water onto the thirsty ground.

Rashali got to her feet, stumbling on a twisted ankle. Three Sazar warhorses stood in front of her, a huge black beast flanked by two slightly smaller dark brown horses. From their mounts, three Sazar warriors clad in silver-trimmed black stared down at her.

Hate and rage clouded her senses. These sallow-skinned, narrow-eyed barbarians had degraded and destroyed her people. They were responsible for the deaths of her husband and daughter and countless others. And they had spilled her water. She drew up precious moisture into her mouth and spat at the man in the middle, the man whose black horse had knocked her down.

The three horses danced and snorted like demons. Two long, curved, gleaming-sharp swords suddenly loomed above her head. The man on the right jumped down from his horse and grabbed Rashali in a choke hold. The point of a knife pricked the skin beneath her chin.

Tears of terror filled Rashali’s eyes and her heart raced painfully, but she refused to look away from the warrior in the middle, whose richer silver trimmings marked him as superior to the other two. She would not bow down, she would not give way, she would not grovel before a Sazar, even if it cost her her life.

The moment seemed to hang suspended as the warrior gave her a long, hard, searching look, as though he were trying to peer into her mind and discover how she dared to defy him. Then he sheathed his sword.

Links to my book:

You Can Also Find Me:

Kyra would love to hear your comments. so why not leave one.

If you liked reading this, why not consider becoming a follower for this blog. Jessica O'Gorek was born in Chesapeake, Virginia on April 19th, 1979. She was raised within the American Indian religion, being taught aside what we all learn in school got taught great respect for the earth and all its living beings. Powwows, sweat lodges, vision quests, you name it, I’ve done it. She was the weird kid who would confront kids on the playground in elementary school when they squished a bug. She would repeatedlu and very sincerely tell them what they had been doing is morally wrong and she'd then pray for the bug to come back as a butterfly in its next life.

She grew up admiring her father, Barry Weinstock, as an author. When she was twelve she started writing novels by hand, and her first consisted of two thousand pages. Her daughter, who is thirteen, is currently working on her first novel, and as Jessica looks towards the future she hopes her daughter willl continue the legacy she has started.

Mother Earth, wounded by the human race and its disregard for her resources, will recruit human souls to serve Her and turn against humanity. A rising force festers; Gemini, a clan of paranormal beings will systematically possess and destroy towns, cities, and states. Amidst the chaos, a forbidden relationship between Onyx, a lead Gemini, and Violette, a human, begins. They will both find themselves in the middle of a revolutionary war that will either save, or destroy our world.

I'd like to THANK Jessica for taking the time in working with me in making this post possible. If you have any questions concerning her book, her writing, etc.; I'm sure she'll be very happy to answer them.